Lockers have been an important part of our daily lives since we were children. We used lockers in school to store our school supplies, as well as a place to hang posters, mirrors, store food, makeup, and electronic devices we were not allowed to have in class. The branches of the military use lockers to store clothing, equipment, and weapons. Here are four Navy locker enclosure designs below.

Bulk storage lockers are generally designed to contain equipment and weapons meant for a group of people, rather than just one person. These lockers are constructed of galvanized welded wires and galvanized steel frames.

Due to how this type of locker has been constructed, it is easy to see within the locker to assess the contents and see what is there, or what is not there. This is what makes it a locker type not generally used for one person as it does not afford a sense of privacy to store personal belongings.

One tier and two tier standard metal lockers are usually the types you see in schools.

They are constructed of 16 gauge steel and are usually either 12 to 15 inches wide, and six feet tall. Each locker compartment has three wall hooks and a double ceiling hook. A variation of this type of locker is a locker which is three lockers wide and has four tiers, or three compartments wide and is a three tier locker.

These locker compartment types can accommodate combination or key locks that have been built in, combination and key padlocks, or even electronic and resettable combination locks. They also have plates that can be engraved with a name or number. When it comes to public use, it is generally better to have a number plate rather than a nameplate.

These lockers have the privacy of standard metal lockers but have a vented exterior. This way, while people can’t see exactly what is within the lockers, they can see the general outline, depending on the light, and notice if something has been added, moved, or is missing.

These are the types of lockers generally used in gyms and employee changing rooms. These vented metal lockers are constructed of 16 gauge steel as well and are five foot to six foot in height and the locker compartments are either 12 to 15 inches wide and 15 to 18 inches deep. These generally come in three tiers are one to three compartments wide. The standard colors for these lockers are blue, gray, and tan.

Heavy Duty Plastic Lockers are generally used in environments where there is high humidity, such as restaurants, gyms, and laundromats. Due to the high humidity where the lockers are used, it is preferable to use plastic lockers instead of metal lockers. 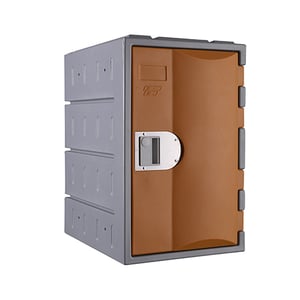 These lockers are constructed of water-resistant high-density polyethylene and each compartment has a shelf that is 16” deep and a double prong ceiling hook.

The doors are 15 inches wide and have stainless steel hinges. These lockers are either single lockers or come in groups of three. They come in three standard colors, which are blue, gray, and tan. Each compartment is 15 inches wide and is18 inches deep. Engraved number plates are available as well.

When it comes to finding the type of locker to suit your needs, be sure to take into consideration the environment and what the locker will be used for. If the lockers are going to be in an environment where there is a high amount of humidity, then the heavy-duty plastic lockers may be a better choice. If storage is the main concern, then the storage lockers would be a better choice.